Yeah, I'm crappy at posting these days.  Part of it is playing over on Facebook, part of it is my usual disorganization, part of it is just that most of life really does suck right now, and the options are narrowing all the time.  C'est la vie.

In an effort to break through the ennui, I've been moving myself forward on getting the clutter picked up in the sewing room, and get projects on the looms.  The first step was to get a warp on the rigid heddle, because that one is by far and away the most infuriating.  I think I'm finally getting the hang of warping it for three heddles though - as with everything, practice is the key.  It took forever.  I got the warp wound on, and then other things intervened.  Then I got all the heddles warped, checked for errors, and pretty much re-warped the whole damn thing.  Infuriating.  But I think I finally got it right, and did a test pattern in scrap yarn to check.  Once it looked good, I set it on the stand and put it aside.  Because I couldn't pick up the assorted clutter without breaking down the table, and I couldn't break down the table until the loom was off it.  Step one, completed. 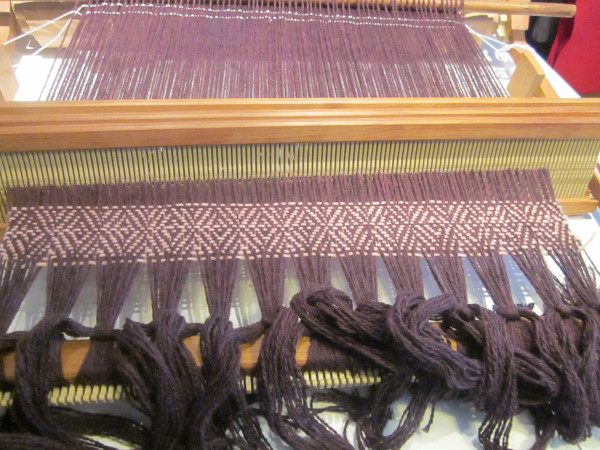 Step 2: pick up the clutter.  I did some desultory picking up and putting away yesterday, and continued today.  Then I ran into what I think of as "the problem corner."  It's the corner that catches... "stuff."  Mending.  Unfinished projects.  Things that I just don't know where to put.  It's a terrible corner.  So I started pushing things around again, and yet again moving around the stuff to be repaired.  Then I had the brilliant flash of the obvious: instead of pushing things around to try to clean up the room so that I can do the mending, how about doing the mending to get it out of the room so I can clean it up?

So this afternoon, in between playing with the pangolin doodle on Google (for the record, no way, no how could I get three stars on the third and fourth levels) I hemmed Charlotte's jeans, re-glued her ladybug mask, bound the raw edges on the padded bags for the tent finials, and patched the big holes in my dad's sea bag.  All those things are no longer in the room, which is a drop in the ocean, but still a good start.  This evening I didn't feel like being up there, so I brought down more mending.  A pair of Charlotte's slippers, a pair of her earmuffs, and a scarf of hers have all been mended, and are also now out of the mix.  It's something.  We'll see what tomorrow brings.  Baby steps.
Collapse