isabeau_lark's laurel document.  I guess I didn't.  So here it is, along with Simon Gwyn's Knighting document.  In two pieces because my home scanner is small.  My friend Aelfgiva has offered to stitch them together for me in Photoshop, but I need to remember to email the files to her.  In the meantime - piecemeal! Hopefully I won't get another assignment soon, because there are other things that I need/want to do.  Unfortunately, Nest really seems to have my number, knowing what I won't be able to turn down.  But for now, I would really like a new dress for Coronation, which means I need to do some sewing.

So, back before Christmas,

jtdiii hosted his cookie decorating party, and we finally managed to make it.  Which is good, because I didn't get any of my own baked at all this year.  It was a lot of fun, and having just painted lots of angels on

isabeau_lark's laurel document, I decided to decorate some angel cookies.  Started with purple wings, like the document, white robe, yellow halo... and then I tried to put in facial features with a large piping tip.  It was bad.  So then I tried to fix it, and made it worse.  The general consensus was that I was channeling the weeping angels in Doctor Who...  Never one to give up, I tried again.  Purple wings, white robe, yellow halo, found a black with a fine tip... and just as I put the eyes in,

vynehorn said "oh, are you putting pupils on the eyes?"  Brilliant!  I hadn't thought of that!  So then I tried to cover the black with blue... and that one looked like it had a black eye.

We decided I was depicting the war in heaven with icing.

I was not going to be defeated by sugar cookies.  Tried again.  This time I had a brilliant idea - I put white dots for the eyes, and then put little blue candies for the irises.  That one looked like a meth head.  That's when I gave up.

Everyone commented that if the first one moved from the bottom of the box to the top during the ride home, I should eat that one immediately.  I ate the meth head angel before I took the picture.  Sorry. 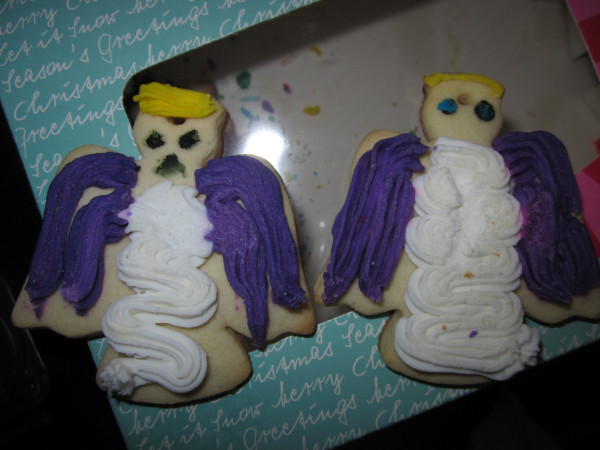 I guess that's why they lead with "Fear not?"
Collapse