I'm thankful that the answer to "why don't we have any water" was NOT "the well has failed."  The well pump, on the other hand...

Bob let me sleep in this morning, and as usual, the cats mobbed me when I got up to go to the bathroom.  I turned on the water for Henry - he has a thing about running water - and the tap was dry.  THAT wakes you up fast.  Bob had already done all the usual things - checked the breaker, checked the box, checked the pressure tank... all that was left was to call Grela.  Which we did.  They had a crew already in Burlington, and sent them over. 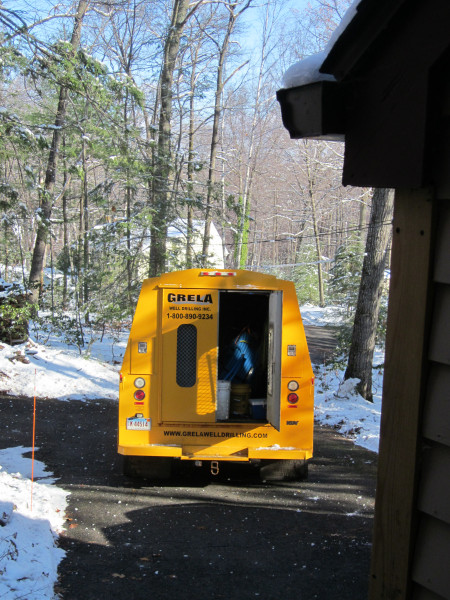 Not really what you want to be looking at the day after Thanksgiving.  But it was VERY nice that they were right in the vicinity. The dead pump.  It was original to the house, so that pump was thirty-five years old.  It owed us NOTHING.  When I found out that we were still on the original well pump, I just started keeping about $2,000 on tap at any given time to replace it.  They don't make them like that any more. The new one.  We won't get thirty-five years out of it, because they literally don't make them like that any more.  However, we took out a 1/3 HP pump and replaced it with a 1/2 HP pump, so hopefully our water pressure should improve.  There were reasons that Bob understood to not put a 3/4 HP in.  I'm disappointed, but any improvement will be wonderful.

Bill and Rob were very nice, and I'm quite grateful that they were able to get here so quickly.  No water sucks.  Of course, it's not much better now.  At the moment we're running the well straight out the back door through a garden hose for a couple of hours to clear the big particulate and the biggest shot of chlorine.  It's supposed to be two days before we can consume it or do laundry.  But we'll be able to flush, and wash dishes.  Of course, guess who let the laundry build up thinking that I'd get caught up this weekend?  Sigh.

Our Black Friday bill so far - $1,630.  I guess that's the Christmas present for the house.

Could be worse - could have been New Year's eve with a house full of people...
Collapse