So, having established the proverbial beach head on the back deck, I managed to get a view of what I was up against.

This was my goal: that's my wood pile, obviously.  Looking at it, I was glad that I brought wood in obsessively on Thursday. Then looking into the woods, I saw this.  The neighbors have a newfie, and she was out enjoying the snow - she was basically swimming through it. At this point in the process, I was starting to feel good about things.  A Charlotte isn't as good for scale as a Bob, but she'll do.  The grill will get dug out tomorrow. 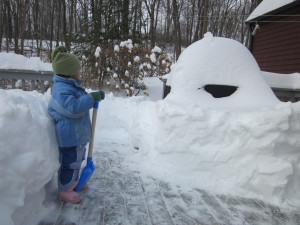 Here's another shot of the woodpile.  I show it to you because of that lump on the bottom - that's also a pile of wood.  The one I'm currently working on. 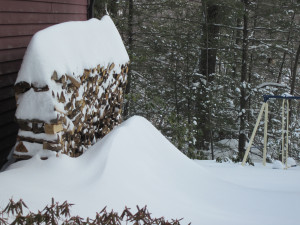 That's the other side of the door from Plan C. Shoveling my way through the middle of the back yard.  There's something wrong with that. 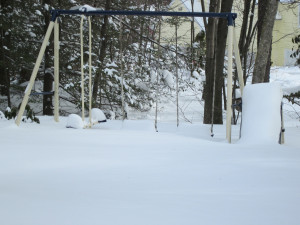 Notice the swings?  They're missing.  I don't think she'll be using the swing set any time soon. 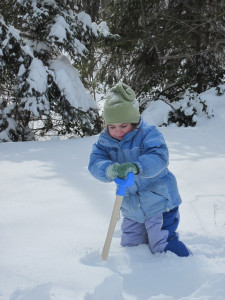 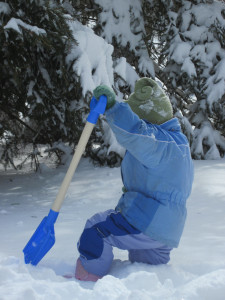 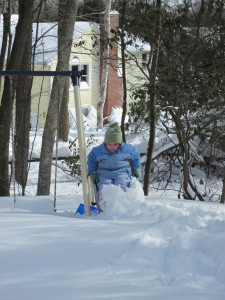 See - I told you there was wood under there.  I'm actually quite worried - the wind was so fierce that it drove *into* both piles.  I actually had to shovel out in between them.  If that freezes solid, my wood for the rest of the season may be one huge mass. She's level with the deck.  That's four steps up. A pathway and a wood pile.  Now I just need the loaf of bread and jug of wine. While I was shoveling my way out of the Forest of Sorrows, this is what Bob was doing - digging us a path to freedom with the snow blower. 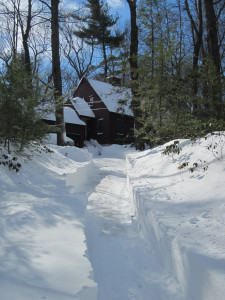 Success - a path all the way to the street!  Freeeeeedommmmm!!! 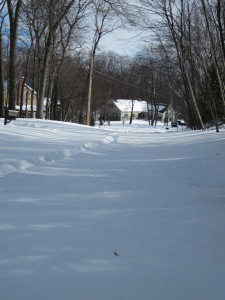 Coda:  Since then, the town has plowed the street.  Of course, they plowed the north side of the street.  So close that the mailboxes are entirely clear.  Those of us on the south side of the street would have to dig another four or five feet out into the street to access that plow swipe.  Really?  You couldn't put it up the middle?  When we called they told us that crews were "still in that area."  Well, they'd better be, or they're getting a call tomorrow morning.

So, tomorrow.  Bob is going to clean out the turnaround, and then he can move his car and clear that spot - it didn't drift solid underneath.  I'm going to finish clearing the half of the deck closest to the house, and maybe clear off the Bilco door.  We'll see how I feel when I wake up in the morning.

Not how I'd originally planned to spend a weekend home.  But we had a nice dinner, and have a fire in the fireplace.  I don't need to accomplish anything else tonight.