Wow, was it a busy week.

I mentioned the parade very briefly.  That was Wednesday.  Wednesday evening we were supposed to go to the fireworks in New Britain, but they decided that the weather report was too iffy and postponed until Thursday.  I could have just let it go, but I’d psyched myself up for fireworks, so damn it, I was going to go.  Thursday after work we came home, ate dinner quick, and got on the road for Stanley Park.  We parked, walked in, picked out a spot for our blanket and settled in.  The weather could not have been more perfect – warm but not too warm, light breeze, very few bugs.  The show started right on time and was spectacular.  I prefer the shows set to music, but this one went for thirty or forty minutes – no cause for complaint there!  Our spot wasn’t perfect, as there was a tree slightly in the way, but it wasn’t enough in the way to bother moving.  Charlotte liked the fireworks.  It went from “woooowwwww,” to “Mommy, I’m scared,” back to “woooowwww.”  She was particularly taken with the green stars.  Then, of course, there was the joy of getting out, along with all the people who had been tricking in all day.  We’d parked in an outlying lot, but apparently not outlying enough to make it easy.  We got home around 11:00pm, and the next morning Charlotte was bright-eyed and bushy-tailed, and I was a wreck.

Wednesday, Thursday, Friday… Friday… Friday Bob’s family came for dinner.  They have a tendency to come up for a week, but never over any weekend days.  So – what to cook for that many people when you don’t have the time to cook a big meal?  For the fourth of July I tend to think of ribs.  But ribs have to bake for over two hours, and I didn’t want to eat at 8:30pm.  Then someone at work mentioned that you can do ribs in the crock pot.  Of course you can!  Brilliant!  Guess who told me?  The resident vegetarian.  J  They got to the house later than planned, but we had a nice dinner and a nice evening, and they got out in time for me to get us packed up for Saturday.

It just didn’t ever slow down this week.  Saturday was OpSail down in New London.  We got on the road early (but later than I wanted, because I just couldn’t get moving,) and headed for Ocean Beach Park.  I was really irked about having to pay $20 just to watch the ships sail by, but there weren’t really other good options.  So we packed in a lunch and some snacks and water, and I brought a bucket and shovel and ball for Charlotte, and dressed her in her bathing suit.

Within moments I not only didn’t regret that $20, I figured it was a bargin.

She loved the size of the sandbox.  At this point she wasn't quite clear on the fact that ALL that other stuff was water. When in doubt - take daddy. 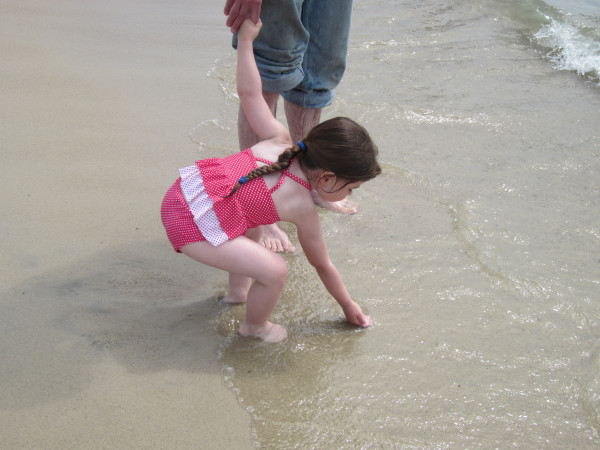 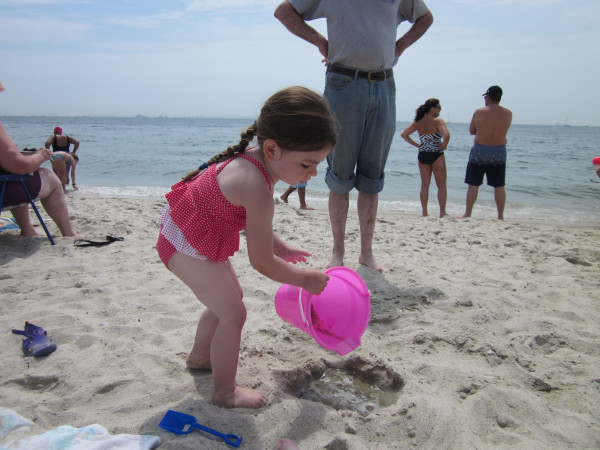 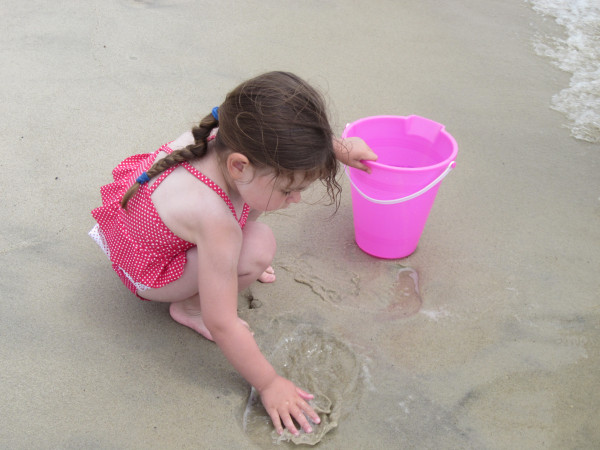 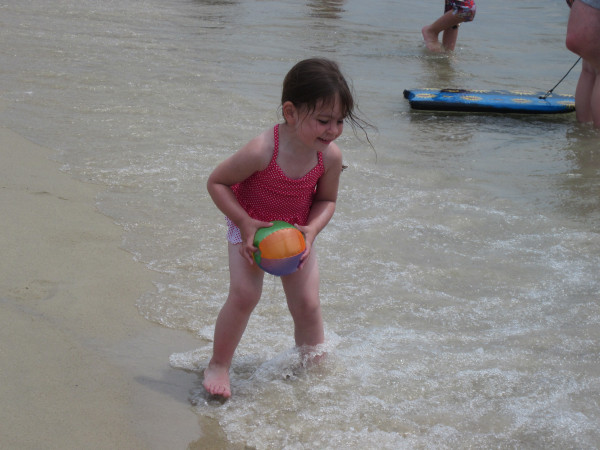 At some point she wandered away from her sandwich, and a seagull stole it.  She was on her way back to do battle for it when I stopped her.  She got probably three-quarters of it before the “bad bird” took it, so she hardly went hungry.  She got dunked a few times - the waves got bigger as the tide started to come in, and her feet got knocked out from under her.  Daddy fished her out, and she didn't seem particularly disturbed by it.  I was rather wishing I had brought a bathing suit - the water was nice, and I could have taken her out a little deeper.  However, it turned out to be just as well that I hadn't.

The ships came by late – a couple of hours late, to be precise.  Apparently the Eagle got her anchor fouled in Niantic.  The ships went by – they were pretty, but didn’t get very close, possibly because they were trying to make up the time they lost.  Point in fact, they were too far away for me to take any pictures with the digital camera.  We’ll see what comes out of the 35mm, but even then I’m not hopeful – I should have popped for that big telephoto while it was available.  Eagle and Cisne Branco were pretty from that distance, but the schooners were really too small to be able to distinguish from the private craft that far out.  The Carter Hull was plenty big to see, but I wasn’t really interested – I go to OpSail for ships with *sails.*  We stayed a bit longer at Ocean Beach, because Charlotte was having so much fun, and I figured there was no way the ships would actually open at 2:00pm if they were running two hours late.  After a while I got antsy, and got us all packed up and out of there, and we headed over to Waterford High to catch the shuttle to Fort Trumbull.

Someone showed us how hard she’d been playing. We got to Fort Trumbull at the same time as the rain.  Luckily, it was just spitting, and to be perfectly honest, I was loving the overcast.  We headed in and got a look at the line for the ships.  They were supposed to have opened at 2:00.  It was about 3:00 and they weren’t open yet.  They were scheduled to close at 4:00.  The line appeared to be *at least* an hour long, if not longer.  We ran into a friend who works for The Day (local newspaper,) and she had been told that they weren’t extending the hours on Saturday.  Charlotte was SO tired that I knew that she wouldn’t make it through the line without melting down so badly that it would all be for naught.  So we walked up the adjacent pier a ways so that I could get some pictures, and then went to get me a t-shirt (I wore holes in my OpSail 2000 shirt, and wanted a new one.)

The Eagle, and the Cisne Branco. 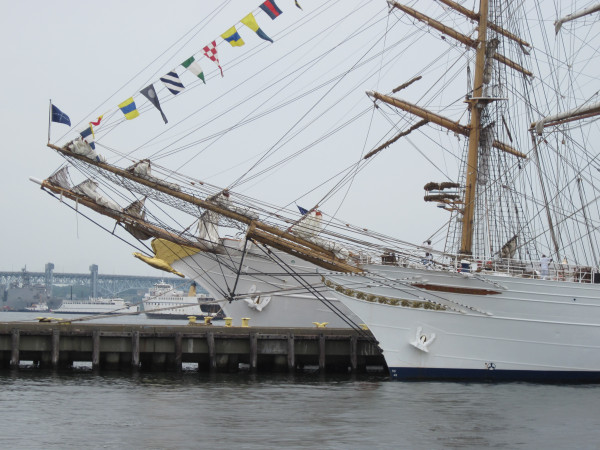 I don't recall who this one is, but I believe the Amistad is berthed behind her. 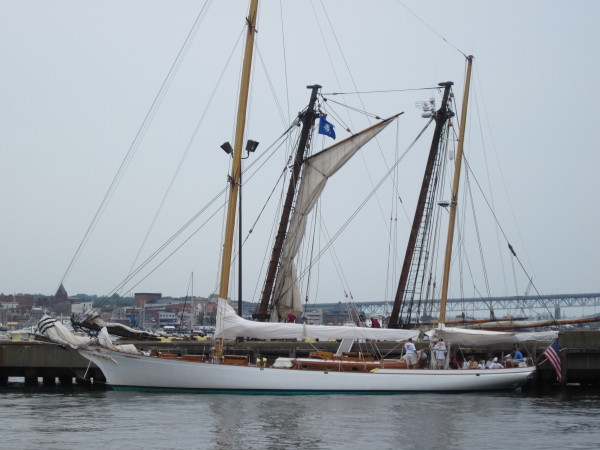 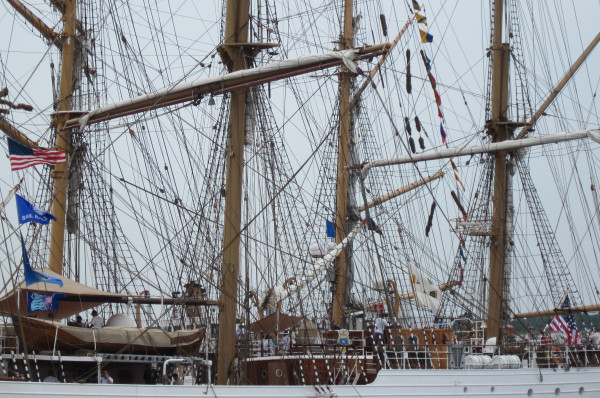 Once I had my shirt, I asked Charlotte if she wanted to go up into Fort Trumbull, and she was very excited to climb to the top.  On the way around, I noticed this particular alignment of guns and port-a-potties.  It made me giggle. As we were walking to the entrance I noticed one of the re-enactors in a really great hat, and complimented him on it.  At that point the gentleman with him said “Fine – just ignore me why don’t you.”  Turned out it was

hawkyns – I just didn’t recognize him in the straw tall hat.  I’ve seen every possible variation of facial hair over the years, but it’s amazing how the hat changes the look.  They’d had all that time while the ships were late sitting at the gun emplacement waiting.  And waiting.  And waiting a bit more.  The only saving grace was that at least they weren’t sitting on a *hot* gun…  I figure it was good practice for Pennsic Opening Ceremonies.

We went into the fort and up to the top.  Not much to see (not that there should be – a gun emplacement doesn’t need to be fancy.  Nice view of the ships though. 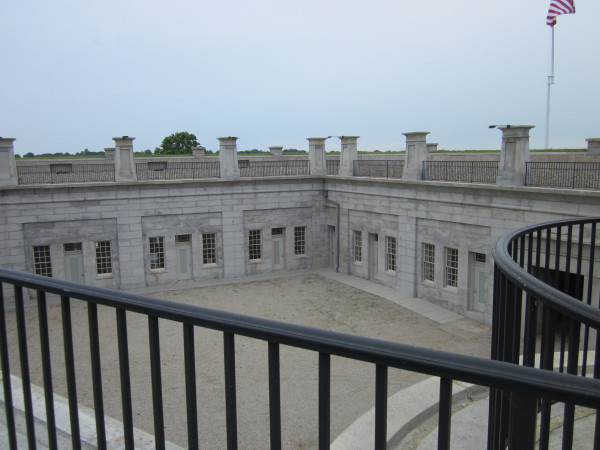 This continues a family tradition of my father making me stand in assorted high/dangerous places to take pictures of me.  I wanted her a little further out, but that verdant green patch to her left is poison ivy.  Sunburn was bad enough, I wasn't going to add poison ivy to the mix! The schooners were all docked at City Pier, but none of them were going to be open to the public, we would have needed to catch a SEAT bus to get there, and all the people going to SailFest were also waiting for that bus – the line for the city shuttle was almost as bad as the line for the ships.  At that point – I was tired, Charlotte was exhausted – heck with it, I want to go home.

Did I mention the sunburn?  Charlotte got just a slight burn on her cheeks and the tops of her feet – it’s already gone.  I’ve got a wicked painful burn on my arms and the tops of my feet, and a slight burn on my face and calves.  I can’t wear sunscreen – I’m allergic to something in the lotion.  In hindsight, I should have worn one of the old gun crew linen shirts.  It wouldn’t have helped my feet, but my arms would be better now.  Bob is just burned to a crisp – feet, calves, knees, arms, face, neck… and he has absolutely no excuse.  He just didn’t bother.  In hindsight, if I'd brought a bathing suit, I could be burned to a crisp... everywhere.  Let's hear it for covering up.

So naturally, since everyone was completely exhausted, we decided to stop at Ikea on the way home.

Sunday (oh yes, there’s more,) my parents came to visit because they needed a Charlotte fix.  It was fairly restful though – mom and dad brought burgers and baked beans, and I had made enough potato salad for both family visits, and made a peach pie Saturday night.  So I sat and talked to mom, dad unconstipated my computer, and we ate good food.  It was a nice way to end a very busy week.

Now I just have to try to make it through the day with shoes and socks touching my sunburn.  Ow.